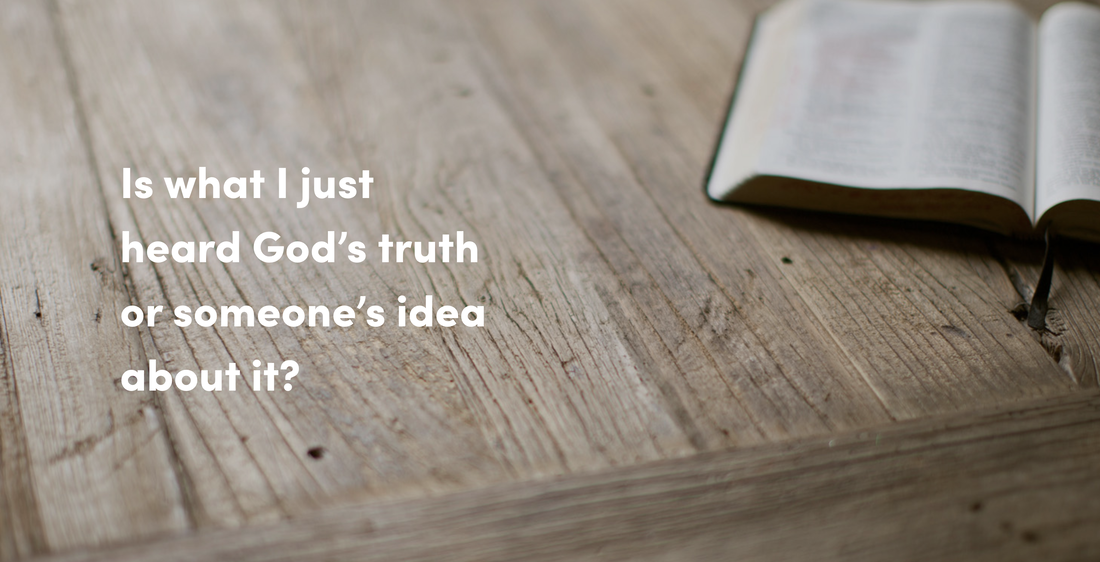 "God helps those who help themselves."
"God never puts more on us than we can handle."
"Never judge anyone."
"God is love. He wouldn't send anyone to hell."
"God's plan is for us to be happy."

Have you heard folks make these statements with absolute certainty they've quoted a biblical truth? Unfortunately, what we hear may be inaccurately quoted, partial truth taken out of context, not in the Bible, or not even true.
Just believing it when people say they are quoting the Bible is like believing what you see on social media. Being on the Internet doesn't make it true. Because people say they’re quoting Scripture doesn't mean they are. We mustn't automatically accept what others say as truth. We need to go to the source — God's Word.
FOUR QUESTIONS TO HELP YOU KNOW IF WHAT YOU HEARD IS TRUE:1. Is It in the Bible?
Ask the speaker to give the source. If they can't, offer to use a search engine – an excellent way to verify if the quote is in the Bible. You aren't being mean or accusatory; you’re clarifying truth. For example, searching “God helps those who help themselves” shows it’s an old saying, but not a biblical one. And, it isn't true!
Many Christians believe they must work hard, pray more, or attend every service, and maybe then God will help them. Nothing is further from biblical truth! "While we were still sinners, Christ died for us" (Romans 5:8)! Help originates from God. It's not dependent on us, but He loves when we call on Him!
Looking up quotes can assist us to better understand Who we serve and clarify that we are learning biblical truth.


2. Is it being quoted accurately?
“God will not put more on us than we can handle.” That’s comforting — but it’s not biblical truth. God's servants suffered, sometimes because of their sin — sometimes because God allowed it. (See Job's story.) Why would we think God would shield us from what can make us grow and become stronger in our faith?
1 Corinthians 10:13 actually says God will not tempt us beyond what we can bear and will give us a way to endure. Through Christ, we can triumph over temptation. We’re not promised a carefree life. Paul asked God three times to remove something that caused him pain and frustration. God said, "My grace is sufficient for you" (2 Corinthians 12:9). In John 16:33, Jesus says "...in this world you will have trouble." He remains the giver of comfort and peace through trials because He is with us through them.
Reading Scripture for ourselves accomplishes two things: we see what God actually said, and the Holy Spirit reveals further truth as we read.


3. Is it taken out of context?
Have you heard, "Do not judge?" Out of context, we might think we’re to ignore another's sin. However, if we read Matthew 7:1-3 in context, Jesus says the judgement we use toward others will be used for us. We can’t focus on another's sin and fail to repent of our own, but we aren’t to ignore it either.
Many of us know “God is love” (1 John 4:8). We need to read the verses before and after that phrase, however. God says if we don't love others, then we don't love Him either. Love is one of His characteristics, and He also won’t tolerate sin or unforgiveness; there’s a consequence for sin. It’s unrepentant sin that will send us to hell — not God.
Reading entire passages shows the entire idea God wants us to understand, not just a portion of it. Taking Scripture out of context can cause us to miss hard but necessary teaching, which enables our faith to be tested and grow.


4. Is the promise really for me?
Jeremiah 29:11 was a promise God gave directly to the group of Israelites who were exiled to live in the pagan culture of Babylon: "For I know the plans I have for you … to prosper … not harm … give hope and a future." Reading the entire chapter (Jeremiah 29) shows God's plan was not to allow the Israelites to continue in their sin, but to graciously give them a picture of the way He would eventually make their less-than-ideal situation right. Though the promise is old, we can gain knowledge of who God is by reading it.
We should never limit God by saying His promises to people long ago don’t matter for us today, yet we should also never assume that a promise pulled out of context directly applies to us. Read the surrounding verses and chapters to get the original context and audience God addressed the promise to. Ask the Holy Spirit to reveal what it means about God’s character and the way He interacts with people, and think about how that idea might apply to your life. Don’t be afraid to get the opinion of trustworthy people who’ve studied the Bible and follow Jesus faithfully, too.


Read The Bible; Do What Jesus Says
Failing to verify scriptural truth can cause confusion for us and those we lead. Taking Scripture out of context is dangerous. Unbiblical or incorrectly quoted passages can become the “Bible according to us,” not God's biblical truth. In order to follow Him, we must know Him. Scripture, accurately read and understood, tells us Who God is and how to obey Him.
To build a foundation of faith from Scripture, be quick to seek out and depend on God for truth, not merely someone's idea of truth.